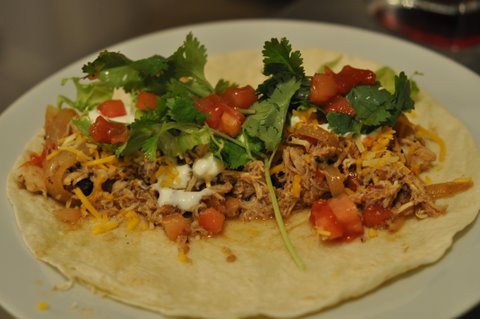 This is another one of those delicious easy meals in the slow cooker.  We love making different kinds of tacos.  You stuff a whole chicken with limes, garlic and cilantro and roast for 6-7 hours.  The chicken is so tender and juicy, your house ends up smelling fantastic too.

-Wash and dry the chicken thoroughly.  Season the chicken inside and out with salt & pepper.  Place in the cooker, breast side up.  Squeeze the juice of the lime over the chicken and put the rind, garlic and cilantro in the cavity.  Cook and cover on low for 6-7 hours until the thickest part of the thigh registers at 180 degrees. 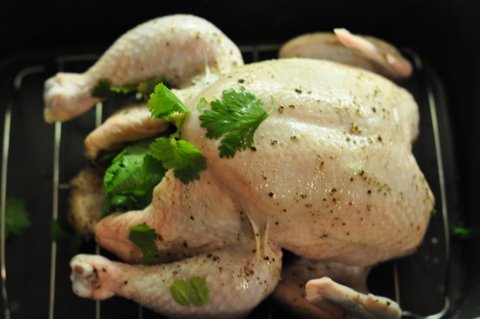 -Heat oil in a large skillet over medium-high heat.  Add the onion and cook, stirring until softened, about 5 minutes.  Add the oregano and continue to stir 1 to 2 minutes longer.  Add the wine and stir until it has almost boiled off.  Take the chicken out of the slow cooker and shred into small pieces.  Add chicken to skillet.  When the chicken is hot, stir in about one-third of the drippings, allowing them to sizzle, and reduce again until syrupy.  Add about half of the remaining drippings and allow to reduce again.  Add the salsa and remaining drippings.  When the liquid comes to a boil, cover and allow to simmer for 10 minutes. Season mixture with salt and pepper.  Assemble into tortillas and add desired toppings.  Enjoy! 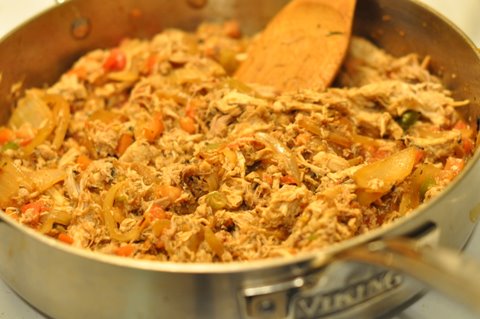